Update on "Law and Order Minorities"

Every so often, Rasmussen breaks out details from its daily tracking poll to show 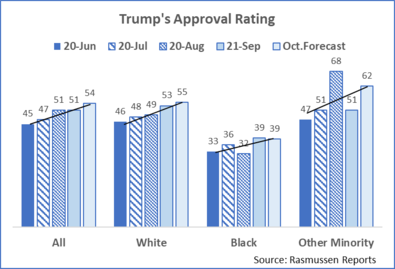 Trump’s “Job Approval” among different ethnic groups. The company’s September 21 poll shows Trump’s national approval at 51%, with 53% among Whites, 39% among Blacks, and 51% for “Other Minorities” (a catch-all group led numerically by Hispanics, followed by Asians.)

The nearby figure shows Rasmussen’s numbers from June through September, updating a chart in my earlier post “Will ‘Law-and-Order Minorities’ Put Trump Over the Top in 2020?”   To show the trends over time I’ve stuck in regression lines estimated on those four months. Trump is trending higher among all groups.

For the heck of it, I’ve also projected the regression lines one month forward to late October. That puts Trump at 54% nationally, 55% with Whites, 39% with Blacks, and Other Minorities at 62%.(!)

That last one will likely turn out much too high, biased upwards by what looks a colossal sampling error in August, though not entirely out of line with plenty of other news about Hispanics moving towards Trump at a good clip.

My earlier post stressed the strong “law-and-order” sentiment among minorities as a force pulling them to Trump. Many minorities also work in manual and service jobs, cannot afford to sit around at home, and will likely favor the Republican “Back to Work” versus the Democrat “Lockdown” positioning on COVID-19. The Democrats, overcome by identity politics, have also indelibly painted themselves the “Black Lives Matter” party, allowing the Republicans to take the high ground of “One Nation” and “common citizenship.” Most Other Minorities don’t see themselves as Black, and they’re also not overly afflicted by “White Guilt” over slavery. “What about my life?” they’re inclined to ask. They respond well to the “we are one family” rhetoric of Trump’s July 4 speech at Mount Rushmore.